"Private tour from Amsterdam to visit the Dutch countryside and windmills"

Are you in Amsterdam for a few days or more? Then you should definitely join us on a Dutch countryside and windmills tour. During this private tour, we’ll leave Amsterdam for a day to get acquainted with our cultural heritage. We’ll go to nearby historic cities, where you’ll have a chance to see how our delicious cheese is made (and taste it, of course!), and to see the authentic Dutch windmills up close. 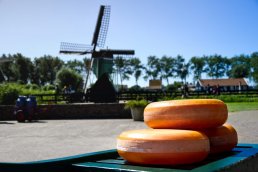 Private tour schedule: from Amsterdam to the Dutch countryside and windmills.

The private tour will be completely tailored to your needs, time and budget. We’ll have plenty of recommendations, but you can help decide which cheese farms and windmills we’ll go to. Wherever you’d like to go, you’ll be picked up in Amsterdam by car. From there we will take a very scenic route to a historic city, such as Edam, Zaanse Schans or Middenbeemster.

In the countryside, two of our favourite cities to visit are Edam and Zaanse Schans. Edam is a city with a rich history that dates back to the 12th century. Over the centuries the town prospered into a place of business. The Edam Cheese, which is shipped all over the world, became a symbol of its success.

There are two local cheese farms for us to visit, which are both very popular due to their authentic Dutch appearance. Moreover, there are two beautiful windmills at Edam. Want more nostalgia? At the Zaanse Schans, you will see nothing but history.

With its many historic windmills and distinctive green wooden houses, they recreated the look and feel of an 18th-century village. Cheese making at the Zaanse Schans is a traditional Dutch guild (company), just like woodworking and clog making. At the local cheese farm, you’ll be able to attend a professional demonstration of the Dutch craft that is cheese making.

LET US TAKE THE HASSLE AWAY

From the moment we pick you up until the second we drop you off, we will take care of everything. You’ll visit beautiful areas with windmills, experience our famous cheese making process and will go back being much more familiar with the Dutch cultural heritage. Your private customized tour can be hosted in: English, Dutch, German, French, Italian and Spanish.

"Create you own custom travel !"

We would be delighted to assist you with your travel experience. Please fill the form bellow with all your wishes and we will get back to you within 24 hours with a travel itinerary designed for you.

Copyright © 2019 Sarah’s Tours. All rights reserved | This website was made with love by Sarah