Akeeba Backup for WordPress requires PHP 7.2.0 or later but your server only has PHP 7.1.33. Highlights and Hidden Gems of Amsterdam Tour |

DISCOVER THE HIGHLIGHTS AND HIDDEN GEMS OF AMSTERDAM

There is a lot to see in Amsterdam.  This tour visits the most iconic highlights of the city and then ventures to off the beaten track. You will see areas where the Amsterdam locals love to enjoy their free time. If you like to see the sights and insights of Amsterdam this tour is for you.

This is an amazingly diverse city with an eclectic selection of things to explore. With so much on offer, it is easy to get lost in the highlights and miss out the hidden gems. As well as the true atmosphere of the city. 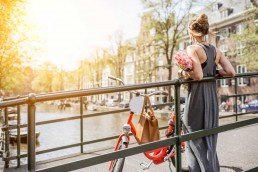 What will you see?

An original Picasso in the Vondelpark

During your highlights and hidden gems of Amsterdam tour. It’s easy to walk right past this concrete sculpture at the southern end of the Vondelpark without realising that it is, in fact, by Picasso himself. Created in 1965 as part of an outdoor sculpture exhibition to mark the 100th anniversary of the Vondelpark, the ‘Figure découpée l’Oiseau’ (‘The Bird’). It was donated to Amsterdam by Picasso after the exhibition and has remained in the same spot ever since.

In the 19th century, the Park Plaza Victoria planned to build their own hotel opposite Central Station. However an elderly owner of the two tiny 17th-century houses dug her clogs in, and refused to sell up.  They simply built the hotel around her houses. The houses are still visible that date from 1602. Park Plaza Victoria Amsterdam, Amsterdam Centrum

The North is a great mix of old and new! This tour is an opportunity for you to cycle around the city’s northern streets passing by breweries and stopping by a few cheese tastings spots! A great tour to see some of the eclectic mixes of the city of Amsterdam.

Sarah’s Tours offers you a customised exclusive experience in Amsterdam, get in touch for your private tour!

Your private customized tour can be hosted in: English, Dutch, German, French, Italian and Spanish.

We would be delighted to assist you with your travel experience. Please fill the form bellow with all your wishes and we will get back to you within 24 hours with a travel itinerary designed for you.

Travel Agent Page
F.A.Q Amsterdam
How it works
Work with us

Copyright  © 2019 Sarah’s Tours. All rights reserved | This website was made with love by Sarah